​RECEPTION Friday, August 5, 4-6 p.m. Come and meet our featured artists, mingle with members and friends, and admire the new art that went on display July 7. And of course, nibble on some light refreshments! (Members please bring your goodies to share.)

Thomas Boardman was born in Chicago and moved to Mountain Home, AR when he was 8. He graduated from Mountain Home High School and attended one year of college in Conway at State College of Arkansas. After my freshman year at SCA,
Thomas moved to Northern California where he attended San Joaquin Delta College in Stockton, CA for 2 years and
transferred to Cal-State Hayward for another year.

Thomas followed his grandfather, father and two older brothers and became an apprentice carpenter in
1973. Building bridges, office buildings, hospitals, schools, shopping malls, and more until I retired in
2012. He moved back to Arkansas in 2012 and after remodeling a house, started turning wood in
November of 2016. 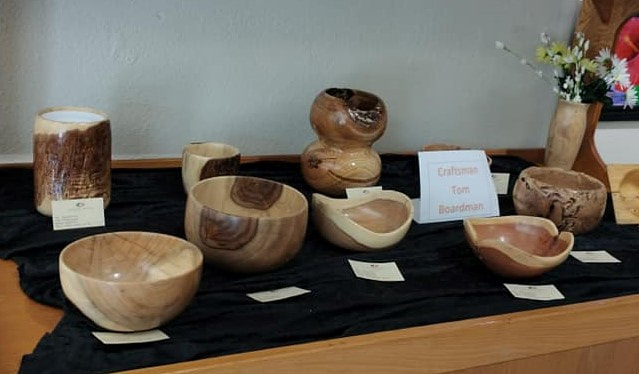